At May 23 State Forest Resources Agency of Ukraine held a national stage of international contest “Young Peoples in European Forests”.  Selection was conducted by State Forest Resources Agency of Ukraine and the Association of Foresters Ukraine.
31 forestry students from Volyn, Kiyv, Cherkassy, Chernivzy, Zhytomyr, Poltava and Kirovohrad regions as well as Malyn and Shazk colleges took part in the competition.
At national stage there were three components of the contest on:
• general knowledge of Ukrainian forest and forestry.
• ability to understand the forest related issues.
• ability to communicate in English on forest related issues.
The first place were taken by team from the Volyn region, second place was shared by teams of Chernivzy and Poltava region. Third place was shared by teams of Kiyv and Kirovograd regions. 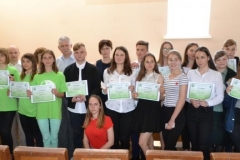 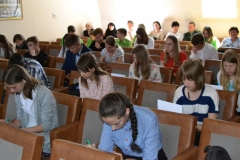